It is now time for the first wave of Sled Dogs to jump in and take up some of the load that our Net Monkeys have been carrying for a number of weeks….and they were happy to do it.

It was a magnificent day on the mountain…if you didn’t look at the bases of your skis. Yes, parts of the Rocky Mountains did stick out of the snow in a number of spots.  Nothing that a couple of days of snowmaking wont solve. 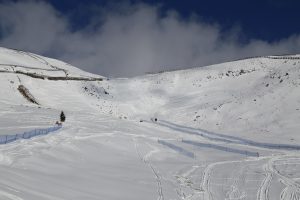 Lots of hugs and handshakes as everyone checked in at the Kokanee Kabin to get their accreditation this morning. The Volunteer Services team had everyone covered.  Accred, lunches, all questions answered…and new lanyards!

The crews wasted little time getting onto their tasks.  The Hillco Boys were busy getting things coordinated at the bottom of the hill as crews headed up the chair.  Snow coverage varies significantly along the course so there was a variety of crew activity going on.  Joan’s slipskirt crew was able to get a number of sections of A net covered.

We are not done just yet with T steel snow farming as John Ford’s crew was busy knocking in T steel in the Gully.

Joel finished up the base of the athletes’ warm up tent with his crew.

Apparently the crew tested the tent base strength with some line dancing before they skied down for their next task. Note: the athletes’ warm up tent will now be called the Saddle Club.  Some think it is because we wanted to bring some more class to our event or inject some western culture into things…..or maybe it is because the tent is next to the Saddle above Sunset Gully. I think all three reasons are good!

Speaking of changes, we have moved the Drill trailer and the Communication trailer into the LLSR Operations Compound. Very easy to get to.  Just a few steps further to the Kokanee Kabin but the walk will be worth it because Carol will again be there this year to greet you. 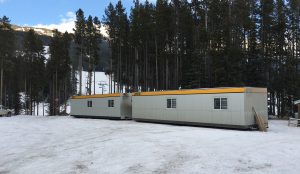 To add your photos to the volunteer image library, please email them to volyphoto@winterstartevents.com