After basking in the glory of yesterday’s snow control confirmation…. 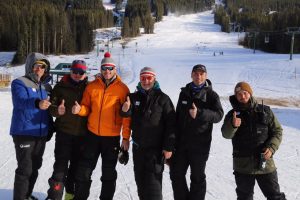 ….it was back to business as usual as things progress nicely on the mountain.

Good temperatures overnight have allowed us to keep all of the snowguns going steady. I drove back from Calgary this morning and a Chinook arch was a dead giveaway of a change in the weather. As forecasted, we ended up with a temperature inversion on the mountain which resulted in some redeploying of our water supply to sections of the course lower down on the mountain. Guns on standby above Coaches Corner were fired up as we took guns offline in Sunset Gully.

What has been a patch of white down the mountain is starting to take shape as a race course.  The Saddle Club frame started going up today… 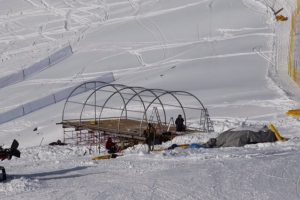 and spec fencing is delineating the course from the start past Lone Pine…. The skiers left bypass around the Gully has worked out very well as the Gully was pretty slick this morning. We winched from Fallaway to Fishnet…. and the slipskirt crew was right behind them.

and from Juniper Crossing to Claire’s Corner. Remember: a flat ski on corduroy, no carving.

Snowmaking in the huge expanse of C Turn is going well. I think the whale at the top of Fallaway can be seen from space…. 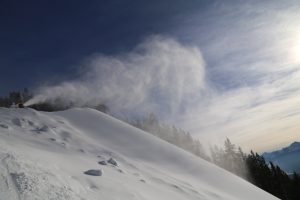 Tomorrow, we plan to start pushing snow in that section.

Our morning safety/orientation meetings on the Kokanee Kabin deck are being captured on LLSR’s webcam. 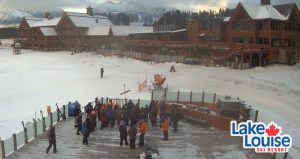 I seemed to be on the opposite cycle with our small Build Week crew today.  If I was up, they were down and vice versa so I didn’t get many pictures of them….but I do know that for a small crew they are getting a lot done. Awesome!

We are expecting snow in the next 24 hours or so….and every little bit helps.

To add your photos to the volunteer image library, please email them to volyphoto@winterstartevents.com